If you’ve been missing hearing from Anne Curtis as much as we have, you’ll be happy to know that she gave her first official interview since giving birth to G3 San Diego via Instagram Live last night. The new mom looked absolutely radiant during the evening session (Note that Australia is five hours ahead of Manila’s time, so Anne was up late for this.)

Throughout the two’s fun conversation, one thing was certain: Anne looked and sounded so sincerely in love, both with her new daughter and her husband Erwan Heussaff. You’d think that after witnessing her grow up in the limelight, we’d know everything there is to know about the multi-talented star. But now that she’s become a new mom, it seems there are more milestones to share with the country’s sweetheart.

On being even more in love with her husband Erwan Heussaff.

Something that regularly came up throughout the interview were sentiments of love and appreciation for her hubby. While talking about their first few days as a family, she shared that being a father has been so natural for Erwan. “Seeing how he is with Dahlia has made me love him more. I know I sound so cheesy, but wala, eh! That’s really how it is,” she said with a laugh.

She said she’s especially thankful for how he has really been helping her as they go through this new experience as parents. Beyond baby duties, he’s also apparently been using his kitchen skills to give her a taste of some of the food she misses most from home. Among them, some Jollibee faves: “Gumagawa [si Erwan] ng mga pa-burger steak or mga parang Chickenjoy, so nakokontento naman ako doon. Thank you, Lord, talaga magaling magluto yung asawa ko!” (He cooks something similar to burger steak or Chickenjoy, so I’m able to satisfy my cravings. Thank you, Lord, that my husband cooks well!”)

The actress went so far as to say that, as folklore goes, and her mom often says, since Dahlia looks so much like Erwan, it’s a sign that Anne loves him more. She does think that “pinaglihian ko ang asawa ko” (she craved for her husband) when she was pregnant with Dahlia. She shared that “in the latter part of my pregnancy, kailangan lagi kong kasama si Erwan. Kailangang lagi ko siyang mayakap, laging kinikiss.” (“I always had to be with Erwan. I always wanted to hug and kiss him.”)

The two have been together so long as a couple, and Anne’s outlook clues us in on their secret to making their partnership last. She said, “You know, it’s like starting a new chapter all over again… and every time a new chapter is starting or beginning, I always see something new in him to love about him.” She gushed about how it’s the everyday things he does for her and for Dahlia, seeing him as a father—it’s this that’s “made me fall in love all over again.”

But cheesiness, aside, she said that the whole experience of becoming a mom, a new parent with Erwan, has also given her the time to rest after working non-stop for 23 years, and enjoy her family life. She said that right now, she is most thankful for the gift of family: her daughter, her husband, and everyone in their family, even if they’re not all together right now. “All I can say is that this journey has been filled with so much love.”

You can watch Anne’s entire interview with G3 San Diego below. It was definitely great to see her warm smile light up our screens again. 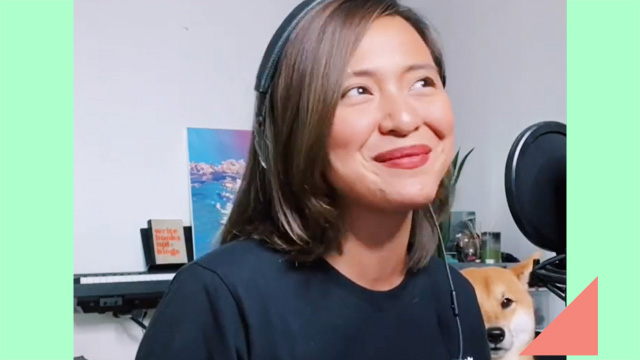