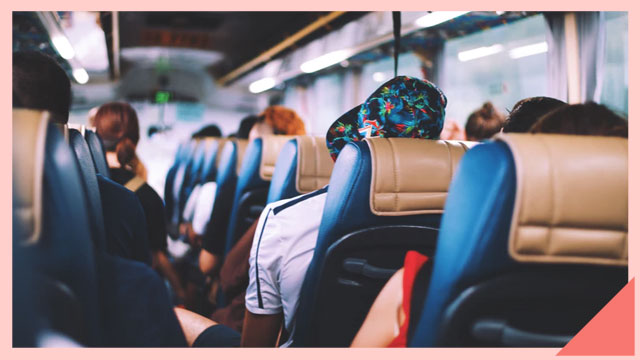 Bus terminals in the Metro often get a lot of flak for being, well, less than organized, and the buses themselves usually get no appreciation either. We could always sprinkle profound commentary on the experience of waiting in line with what feels like a thousand other people from every corner of Metro Manila to get into an overcrowded bus into this paragraph, but we would much rather point you towards the legitimately nice things we actually do have.

Several liners have premium buses equipped with what we would like to refer to as "The Works." Think anywhere from plush recliners, airplane-style entertainment, a bathroom, up to the holy grail: onboard WiFi. We round up essential info on the buses you can take for an easy trip heading north or south of Luzon.

Here are a few province-bound luxury buses you can take from the Metro:

Heading to the mountains of Sagada used to evoke images of tourists on top of jeepneys navigating treacherous roads, but now, all it takes is a bus ride from Quezon City. Provincial bus company Coda Lines has exactly what you need for a quick escape from the Metro: a deluxe bus that will take you from urban streets to green seas in around 12 hours. The Super Deluxe Bus comes with an onboard restroom and WiFi. The bus has 35 recliner seats and each passenger gets a free blanket, so you can be sure of a good rest.

Buses depart from HM Transport Terminal-located at Maryland Street corner EDSA, Cubao, Quezon City-at 9 p.m. and 10 p.m. and will take you all the way to the Sagada Town Hall. One-way fare is set at P980. You can book your tickets online either through the Coda Lines site or the Biyaheroes site.

You could always take a plane to Ilocos Norte, or you could save a couple bucks and take this super luxe bus instead. Farinas Transit has a line of Super Deluxe coaches with plush reclining seats-yup, three in a row for ample leg space-airplane-style individual tablets, on-board restroom, and WiFi. The trip will take around 12hours, so you're going to need all the amenities to stay sane.

Buses leave from JAC Liner bus terminal along EDSA, Cubao at 10 p.m. One-way fare is at P900. You can reserve a ticket through the Farinas Transport site.

Another option to go all the way north to Laoag City is Partas' line of Super Deluxe Buses. These coaches have all the works, including reclining seats, USB charging ports, individual tablets, an on-board restroom, and WiFi. What gives this bus an edge is that it also stops by the terminals in San Juan, La Union, and Vigan City, Ilocos Sur, so you can also get a super comfy ride to any of these destinations.

Buses leave from the Cubao Partas Terminal at 12 p.m. and 7 p.m. There are multiple stopovers so get comfy! One-way fare is at P936. You can buy tickets through the Partas Transit Facebook page or the Biyaheroes site.

If you—or your wallet—aren't up to spending on plane tickets to Tuguegarao City, you can always just try this bus instead. Dalin Liner has a bus that will take you straight to Tuguegarao City. It will still take 12 hours to head up north, but at least you'll be travelling in comfort. Be sure to ask for tickets to ride the new Deluxe Higer A90 (JD Series), launched in December 2019, to get "The Works." This includes airplane-style entertainment (the Android-powered tablets have pre-installed movies), e-books, and games-recliner seats, USB charging ports, foldable trays, and an onboard restroom.

Buses depart from the Dalin Liner Terminal at Cayco Street, Sampaloc, Manila and will take you all the way to the bus line's terminal in Tuguegarao City, Cagayan. There are no stopovers for this trip. One-way fare is at P850.

The summer capital has more than its fair share of tourists trooping up the mountains on buses. One luxe option for those who value their comfort are Genesis Transport's line of Joybus Premiere buses. These executive coaches come with spacious reclining seats-just three in a row-and yup, each passenger gets Personal Entertainment Devices strapped right in front of them. You can surf the 'net, watch movies, and listen to music-just don't forget your earphones! You can also charge your devices through the USB ports, and eat your snacks in peace with on tray tables and cup holders. The onboard restroom is an added comfort.

Buses depart from either Pasay or Cubao Genesis bus stations. There will be no more pit stops once outside of the Metro, so the trip will take around five to six hours depending on the traffic. One-way fare is at P760 from Pasay and P740 from Cubao. You can book your tickets online through the Genesis Transport partner sites Pinoy Travel and I Want Seats.

It looks like airplane-style entertainment really is the way to go, especially for luxury buses. Another point-to-point service straight to Baguio City, these coaches come with extra-comfy reclining seats with only three in a row. No more odd armchair battles with your seatmate here! And the tablets where you can get your fill of movies, games, music, and even e-books are a sure plus during the five-hours-or-so trip. Aside from the onboard restroom, overhead bins (so you can keep all your valuables close), USB charging ports, and WiFi, this bus also has CCTV cameras installed for extra security.

If you're aching for some sun, sand, and sea, you can head on over to Baler, Aurora in style. The Joybus coaches of Genesis Transport also plies this route-and while the Deluxe Class hasn't got all "The Works" of the Premier Executive, it is still has more than enough comforts to keep you sane during the five-hour trip. Deluxe Class coaches have reclining seats-with four in a row-an onboard restroom, and WiFi.

Buses depart from the Cubao Genesis bus terminal. One-way fare is at P730. You can buy your tickets online through the PH Bus site.

This bus might just be the closest thing we have to teleportation-if falling asleep in Metro Manila and waking up in Naga City, Camarines Sur counts, that is. Bicol Isarog's sleeper buses come equipped with a total of 18 bunk bed-like couches so you can doze off in relative peace throughout the 10-hour land journey. Each cove comes with a curtain for privacy and your own USB charging ports. Plus, there is an on-board restroom and WiFi. We suggest bringing your own sheets though!

Buses depart from the Bicol Isarog terminal along EDSA, San Martin de Porres, Cubao, Quezon City every 9 p.m. One-way fare is at P1,500. You can book your tickets through the Bicol Isarog site.

If sleeper buses aren't your style, you can opt for plush, oversized recliners instead with Bicol Isarog Transport System's line of Skybus Premiere coaches. These buses combine two kinds of seats: four single oversized recliners up front and 16 not-as-plush-but still very comfy-seats at the back. Though there's no airplane style entertainment here, you do get the comfort of extra space and an on-board restroom.

Buses depart from the Bicol Isarog terminal along EDSA, San Martin de Porres, Cubao, Quezon City every 8:15 p.m. One-way fare for the plush single seats are P2,000 while recliner seats are at P1,250. You can book your tickets through the Bicol Isarog site.

Getting to this UNESCO World Heritage site can sometimes take up to a half a day's worth of driving so you best believe this luxury bus is a welcome transport choice. Partas' luxury buses have recliner seats-maximum of three in a row for premium leg space-complete with airplane-style entertainment, USB charging ports, free WiFi, and an on-board restroom. Just note that this is not a point-to-point service so you might be having quite a few pit stops, although on a really good day, the trip could take as little as six hours.

Buses depart from the Partas Terminal at 816 Aurora Boulevard, Cubao, Quezon City daily at 8 a.m. One-way fare is at P960. You can book your tickets online through the Biyaheroes site.

0 Shares
Share Tweet Pin Post a Comment
Personal Loan Calculator
Use this calculator to know how much you'll be paying based on current interests of banks.*
Get the latest updates from Female Network
Subscribe to our Newsletter!
View More Articles About:
Femalenetwork Buses Road Trip Hustling
Recommended Videos
Comments
Trending on Network