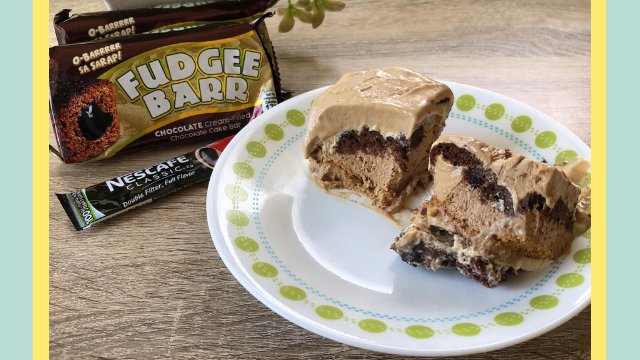 By now, you've probably heard of the Dalgona coffee trend, and you've probably tried it, too. You may have also tried a couple of non-coffee iterations of the food trend.

Here's another Dalgona recipe you might like for your next merienda. A vlogger under the name Excursionista Diaries shared her recipe for Dalgona coffee cake. The good thing about it is that you don't need an oven for it!

The ingredients she used are:

The total amount she spent for the ingredients is P92, and she ended up making two tubs worth of Dalgona coffee cake. Sulit!

To make it, first slice the Fudgee Barr cakes in half. Set it aside, and then pout the condensed milk in a bowl and start whisking until you achieve a foamy consistency.

Tip: She further explains that chilling it prior to using it helps you get that foamy texture much faster.

Once you're done whipping, split it into two equal portions and add the instant coffee in one of the condensed milk serving.

Get a small tub and start layering: Fudgee Barr slices first, plain whipped cream next, whipped cream with coffee after, and then repeat the process again.

Chill it in the fridge for at least five hours and there you have it! Watch her the full instructions here: