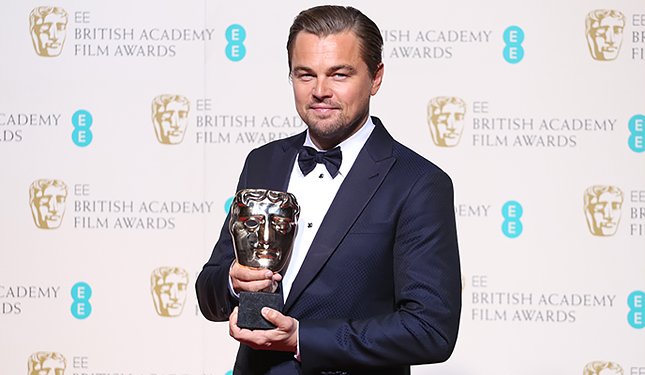 Leonardo DiCaprio’s revenge thriller The Revenant was the big winner at the 2016 British Academy of Film and Television Arts (BAFTA) Awards on Sunday, February 14, 2016.

In his acceptance speech, DiCaprio wished his mother a happy birthday and praised his co-star Tom Hardy, adding, "Tom, I want to thank you for your fierce loyalty as a friend… I could not have done this without you."

Kate Winslet scored a Best Supporting Actress prize for Steve Jobs and told reporters that awards still mean a big deal to her, saying, "I just feel so grateful to still be doing this job. I really am – I’ve been doing it since I was 15 and I still love it as much as I did then, actually probably even more because I know how hard it is to pull it off and juggle everything with life… It really does mean so much to me."

When asked about preparing an Oscars speech, she replied, "Oh my God, do you have to even ask that question?! I keep not preparing them at all, I’m so convinced I’m not winning any of these things. It’s completely overwhelming."

Other movie winners included Inside Out for Best Animated Film, Star Wars: The Force Awakens for Best Special Effects, Brooklyn for Outstanding British Film and Amy for Best Documentary.

The ceremony was hosted by Stephen Fry from London’s Royal Opera House.

The full winners are as follows:

Best Animated Film: Inside Out

Best Film Not in the English Language: Wild Tales

Outstanding Debut by a British Writer, Director or Producer: Theeb

Entertainment
7 Celebrity Hotties Whom You Wish Could Be Your Valentine