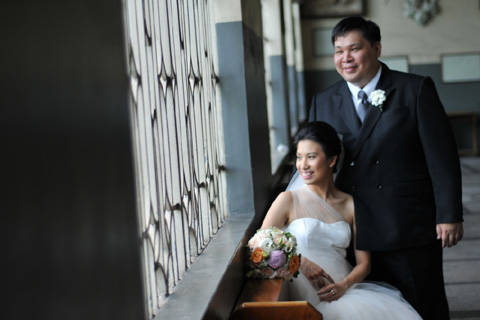 Pauline and Gem celebrated their big day with a simple wedding that featured a blue motif. A filling feast and warm ambiance made their event a fun and intimate gathering for all their loved ones.

Want to know more about Pauline and Gem's story? Click on any of the following links:

Pauline and Gem first met in 2008 at the birthday party of Pauline's cousin. There, they shared the same table, and that led them to converse and share drinks for hours. However, Pauline didn't feel right away that Gem was hitting on her the whole time until he blurted out to her: "I don't know if you've noticed, but I really want to go out on a date with you. Can I see you again [after] tonight?"  After being caught off-guard by Gem's invitation, Pauline has started to see more of Gem everyday. "He always brought me a slice of chocolate cake because he knew I didn't like flowers. I still tease him about the chocolate cake having 'gayuma'," the bride shares.

As their romantic relationship progressed, the couple thought that they would end up together, and had no need for a grand proposal. "In January 2010, we were talking casually about [the] future, and I realized that I was about to graduate in about a year and a half. I asked him, 'Planning a wedding takes about a year, right?,' to which he replied, 'Yes, so?'" Pauline just went on to ask, "So, want to get married?" It was then Gem's turn to be caught off-guard--after nine months, he presented Pauline with an engagement ring, which was a gift from his mother.

Back to main page
Find out about our wedding preparations

Pauline and Gem wanted a simple wedding that would make everyone feel at ease. With that in mind, the couple opted to focus on their reception menu, in which the bride specially requested to do without entrées she could not pronounce. Instead, the couple treated their guests to a sumptuous Filipino feast. With a cool and chic monochromatic blue color palette, the couple was also able to make their wedding tableau pleasing to the eyes.

In pulling off a warm yet festive celebration, Pauline received a lot of help from her sister, who got married ahead of the bride, and helped her with her own preparations. Moreover, Paulone cites visiting BridalBook and attending bridal fairs as her tools in planning her own wedding without the help of a coordinator. With her hands-on approach, the bride shares that being over-prepared is okay as it gears one to be resilient to hitches on the big day.

How well do you know your own emotions? by Charlene J. Owen
Load More Stories 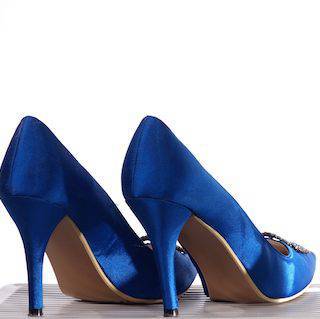