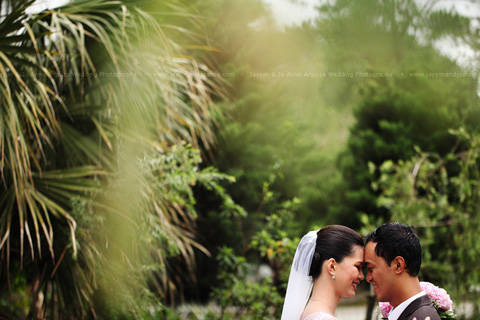 Lea and Ronnie marked their church wedding in Baguio with a cherry blossom theme. The July affair exhibited a dreamy ambiance as it was laced with a chic white, pink, and peach color palette.

Want to know more about Lea and Ronnie's story? Click on any of the following links:

Lea and Ronnie met seven years ago as they were both working as Medical Technology interns at a hospital. At first, they were mere friends, but it didn't take long for Ronnie to develop feelings for Lea. Ronnie pursued Lea throughout the duration of their internship until they graduated, passed the board exams, and even when Ronnie already moved to New York. "Even from miles away, Ronnie [would] still send [me] emails everyday and call [me] once in a while," recalls Lea.

For three straight years, it seemed that Lea had no plans of reciprocating Ronnie's intentions. Just as Ronnie was about to lose hope, Lea one day told Ronnie the three words he'd been longing to hear. The two then developed a long-distance relationship, which lasted two-years. Once a year, Ronnie would fly from New York to visit Lea in the Philippines.

On one of Ronnie's trips, on the eve of his flight back to New York, he treated Lea to a hearty dinner at the Manor Restaurant in Camp John Hay in Baguio. "[It didn't seem that there was] something special, since it became a tradition for us to have dinner there [before Ronnie flew back]," shares Lea. When dessert came, the waiter presented Lea with a cake, and when the waiter turned the plate, Lea found a ring from Ronnie. Ronnie then popped the question, to which Lea replied with a couple of giggles and tears of joy. A year later, the two had a civil wedding, which was followed by a heartwarming church wedding the year after.

Lea and Ronnie brought their vows to the altar with a dreamy cherry blossom-themed wedding in Baguio. A color palette featuring white, pink, and peach, which complemented the couple's chosen theme, was incorporated in various details throughout the wedding. The hands-on bride also laced the event with a number of DIY projects, which included accessories for her entourage and accents for the reception.

With enough time to prepare for the big day, everything fell perfectly right into place for the couple's wedding. Lea shares that brides should follow their instincts. "If you felt that ‘this-is-it' moment, be firm [about] it. After booking a certain supplier, wander no more for another," she asserts. She adds: "Let go on the big day. Suppliers [have handled] a lot of weddings more than you [have]. They are the experts, and that [is] why you chose them. There might be some [things left] undone, but for sure, the guests will not notice it." And most importantly, Lea stresses, "Focus on your partner and the moment. Your [wedding is bound to be] perfect in its own way." 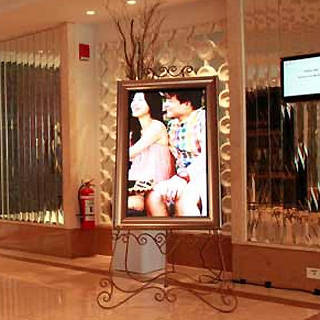 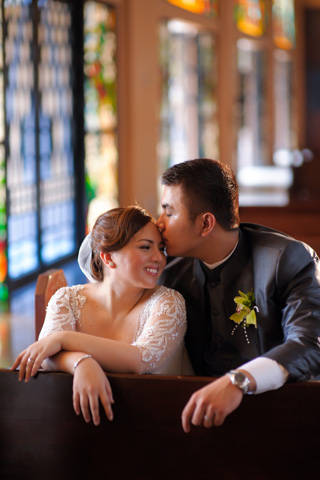