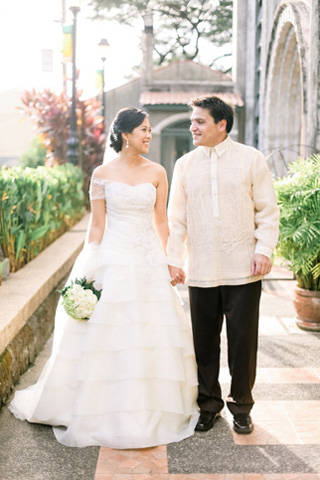 New York-based couple Lanie and Andrew tied the knot with a celebration that was a harmonious fusion of different cultures. A chocolate brown and chartreuse green color palette added warmth and cheer to the December affair.

Want to know more about Lanie and Andrew's story? Click on any of the following links:

Lanie and Andrew met back in September 2000, when they both attended a dinner ball in Canberra, Australia. They were introduced by a common friend, who was Andrew's mentee and Lanie's colleague at the Australian National University. The couple's first meeting was blessed with a romantic view of the lake, as the ball was set at the Regatta Point by the serene Lake Burley Griffin.

Nine years after their first meeting, Lanie and Andrew found themselves on the way to the altar. On October of 2009, Andrew gave Lanie an unforgettable birthday gift as he took her to Mosel, Germany. The said German region featured a river and vineyards by the banks, which the bride is fond of. "We spent the first day with a romantic cruise of the Mosel River, a visit to the Cochem castle, [a trip] around vineyards [where we sampled] Riesling and federweisser, a product of fermented freshly pressed grape juice," shares the couple.

After such a fulfilling trip, the couple capped their day off with a dinner. There, Andrew sincerely asked Lanie: "Do you want to get married next year?" Lanie, without any hesitation, said yes and threw the question back to Andrew, to which he replied yes. After a few seconds of silence, Andrew said: "You realized I just proposed marriage."  Lanie just smiled and embraced Andrew for making her birthday truly special.

New York-based couple Lanie and Andrew tied the knot with a dreamy and romantic destination wedding in Bulacan. Lanie, who was born and raised in the Philippines, and Andrew, who is half-Australian and half-Filipino, decided to have a church wedding in the bride's hometown to not only pay tribute to their ancestral roots, but also to celebrate a harmonious fusion of different cultures.

While the couple incorporated Pinoy flavor into the attire and roles of the entourage, they also observed some Western wedding practices. For instance, the entourage waited for the couple by the altar, instead of walking down the aisle. The couple also had their misalettes printed in both Filipino and English to make sure that all their guests, from various parts of the world, would understand the ceremony. Moreover, the couple marked their wedding with a dreamy outdoor reception, which featured a warm chocolate brown and a cheery chartreuse palette.

With their wedding's dreamy elements, the couple was able to seamlessly weave together different cultures into one momentous event. They filled their union with things that reflect who they are, and the things that they love about one another. In order to pull off a similar heartwarming celebration, the bride suggests: "Plan ahead as much as you can so you can enjoy the day itself.  Don't leave everything to the end so you won't be tired and anxious shortly before the day."  She adds, "There will always be something you could think of but you have to know when to stop and finally relax." 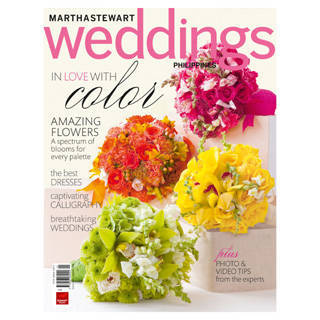 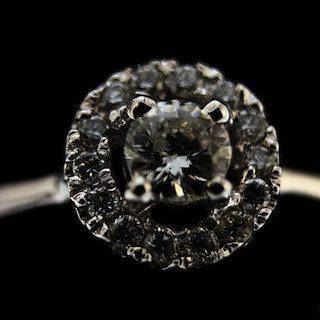