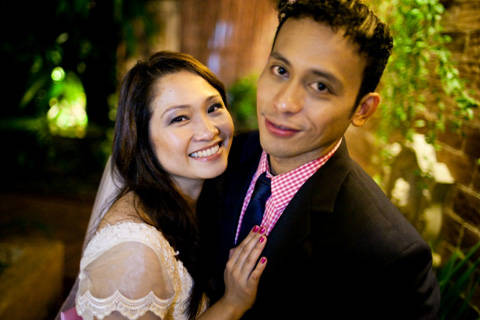 Karen and Ryan proved that love is sweeter the second time around as they tied the knot with a charming intimate wedding. Laced with lots of DIY details, the couple's vintage chic affair exhibited warmth and whimsy.

Want to know more about their story? Click on any of the following links:

Karen and Ryan were high school sweethearts. Their relationship spanned seven long years. However, when they were in college, the two broke up as their relationship turned into a challenging long-distance one. Karen moved to Manila, while Ryan stayed in the province. "We went on our separate ways and led our own lives--he became a chef while I pursued a career in sales. During our time apart, Ryan would attempt to pursue me, but to no avail," shares Karen.

After seven years, Karen and Ryan's paths crossed again. They did some catching up through Yahoo! Messenger, Karen shared that she just got out of relationship, while Ryan told her that he had just moved to Manila. They became friends again, and after a few months, decided to give their relationship another shot. Eventually, Ryan asked Karen again to be his girlfriend along the shores of Boracay. A year later, on Christmas day, Ryan asked her to his wife.

A lovely and intimate celebration marked Karen and Ryan's union. With only a total of 45 guests, the couple's wedding was cozy and heartfelt. A vintage chic theme laced the affair, and lent a warm and charming flair. A blue and pink color motif--which was showcased through the wedding's dress code--accompanied the theme,.

The couple considered their wedding as one big DIY project, which is why unique and personalized details peppered the affair. The invitations, place cards, menu cards, décor, and souvenirs were all specially crafted and prepared by the couple. "Days and nights were spent cutting paper and creating mock ups. I spent months going to thrift shops, department stores, and specialty stores to buy the pieces for the décor," shares Karen. With all the effort the couple poured into their wedding, their special day was filled with so much love.