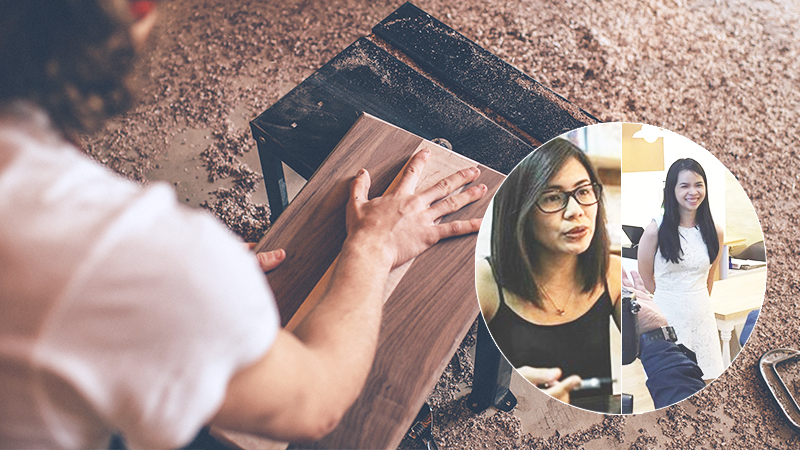 
Common Room co-founder and veteran crafter Roma Agsalud defines the creative entrepreneur as someone who “inspires and creates with the work that they do.” That definition may be vague since any line of work can definitely move and stir people to do better with their lives. But what probably sets creative entrepreneurs or crafters apart is the amount of labor they pour into every product they put out.

“Sometimes, you can’t really force them ([crafters] to create more inventories) because you don’t want them to not love what they do,” Agsalud said. “There has to be a certain balance on pushing them to their best and giving them space.”

Common Room and The Craft Central are just some of the retail stores that house different craft products in a single space. Each one currently carries more than 80 brands and as chief owners, Agsalud and Ventura are witnesses to the many struggles that crafters face, from dealing with demand to the uncertain stream of revenues.

“Some months there are rarely any sales while there would be a season where everything you put on your shelf gets sold out in a matter of days,” Agsalud added.

So how does one make it?

1. Save before jumping into entrepreneurship

Most, if not all crafters, usually start their ventures as part-time work. Some stumble upon their current line of work as part of their past-time, eventually growing into a full-fledged business. Craft Central co-founder Alexis Ventura shares the same story. The former cosmetics brand manager used to just do calligraphy to de-stress after work, until her creations caught the attention of the public.

“When I started calligraphy, the thought (to put up a business) was there but it wasn’t my end goal. I just really wanted a hobby,” Ventura said.

Eventually, she took the leap of faith, but not before pooling enough savings as safety net for months to come as a freelancer.

Agsalud recommends saving at least three months’ worth of salary, while Ventura gave herself the ultimatum to earn at least half of her salary by the time she hit the sixth month as a freelancer.

“You don’t have to save everything just for that jump alone, but enough for you not to get pressured once you do crafting full-time,” Agsalud added.

2. Let the world know what you do

Since both crafters started their businesses as a part-time venture, they would work on orders after work or during weekends, and posting every creation once they can. This way, a crafter can gauge if his or her brand has market or potential.

“Post your work then share it online. Join cheap bazaars, some can get a space now for as low as Php 700 a day. There are many avenues for a crafter to showcase their works these days,” Agsalud said. “So by the time you commit to the business full-time you’re no longer just jumping to nothingness.”

Like most retailers, the busiest months for crafters are the –ber months or the Christmas season. Agsalud said she reminds her partners to stock on inventories as early as August to avoid getting burned out by the time December arrives.

But even with all the preparations and constant reminders, there’s nothing like getting out there and doing the work. And this is when everything gets tricky.

“Some can get easily impatient, they ask why isn’t it working? Why am I not making any sale? But really, that’s how it is at first and you just have to get over that hump,” Agsalud said. “You just have to push to survive really.”

One way to keep things sustainable is to hold workshops, which Ventura did as part of her work on Ink Scribbler. Initially a one-man team, Ventura eventually tapped the help of other artists to do design work with the barrage of wedding invite requests they get every month.

“That’s the difference of having a business and doing corporate [work], doing more things will give you more money. So if you just make more events or workshops, then you’ll definitely earn,” Ventura said.

In Common Room, Agsalud lets her store partners hold workshops in their stores for free to help them cover their rental space.

“If you’re hard-working then you can easily recuperate the expenses. Couple that with your diligence to post on your online shop then you can cover rent,” Agsalud added.

During her early days in PopJunkLove, Agsalud shared she took on every project that came her way just to cover expenses, an advice she still gives to every young entrepreneur that comes in to Common Room.

“Every challenge—if you just keep thinking about it—then it becomes an excuse. If you keep thinking of them as challenges that stop you, then they’re just excuses because there’s always a way to solve them,” Agsalud said.

Get the latest updates from Female Network
Subscribe to our Newsletter!
View More Articles About:
Entrepreneur.com.ph Common Room
Trending on Network