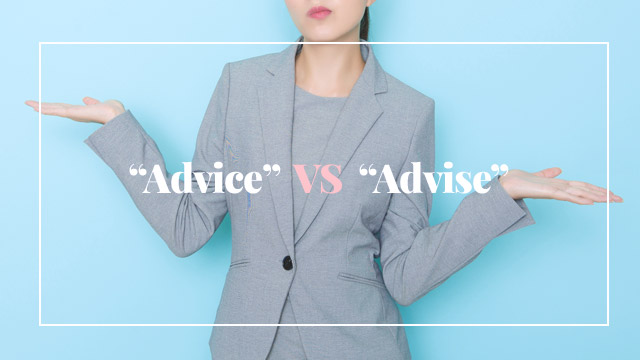 People always say, "use your words!" But all too often, the words we know don’t always mean what we think they mean. This is especially true in a multilingual like ours, where we often grow up speaking one language at home and another (or even more than one) in public. And when it comes to making sure we use the right words so we do better at saying what we mean and meaning what we say, it doesn’t hurt to study up!

Keep reading for a few commonly misused words and an explanation of what they really mean.

Although both words are adjectives used to imply something negative, they are not interchangeable. Adverse means harmful, disadvantageous, or unfortunate. Averse is used when someone has a strong dislike of or is hostile to something. So bad weather may cause adverse conditions, and people are generally averse to bad weather.

The first is a noun, and the second is a verb. Thus, you give or receive advice, but you advise someone of updates, recommendations, and so on. One common way this word is misused is when someone tells you they will “wait for your advise” on something.

You assure when you tell someone something in a confident manner to remove any doubts about it. And while some dictionaries and style guides use ensure and insure interchangeably to mean a guarantee or to make something certain, only insure is used when an insurance policy is involved.

These words are often used to describe symptoms experienced by the body, as of injury or illness. A symptom, such as pain or discomfort, is chronic if it persists for a long time or frequently recurs; it’s severe if it is intense; it’s acute if it is both severe and manifests quickly, such as an attack or sudden injury.

When used as a noun, effect is a result or consequence; as a verb, it is to bring something about or cause something to happen. The verb affect means to have an effect on something. It can also be used to mean to have an emotional impact on someone.

Many people use these abbreviations interchangeably—and incorrectly. E.g., which is short for exempli gratia, means “for example” and should be used when you are providing examples that illustrate a point. I.e., on the other hand, is short for id est and means “that is” or “in other words” an should be used when you are further explaining a point.

The single word everyday is an adjective and most often used in before the word it describes, as in everyday activities. On the other hand, every day is an adverb, as in activities we do every day. Unless the term appears in front of a noun, the two-word version is always the one you want to use.

The word farther refers to physical distance (tip: it’s easy to remember when you note that the term contains the word “far”), while further refers to metaphorical or figurative distance. So you can push your boyfriend farther away when speaking about actually putting your hands on him and shoving, but you can also push him further away emotionally. (Although hopefully you’re not doing either without good reason!) Still confused? When in doubt, use further because it can also encompass physical distance, while farther doesn’t work for figurative distance.

Use fewer if you are referring something you can count. Therefore, you might have fewer pesos, problems, peppers, or pizza slices than your companion. Less is used for singular mass (noncount) nouns, so someone might have less rice, resilience, rest or research than you do.

You are pretty much always looking to use gauge. The word gage is archaic and is pretty much never used in a modern context (it refers to a token or valuable provided to pledge good faith or guarantee performance). When referring to an instrument used to measure something or the verb meaning to estimate or measure a value, use gauge.

It’s not entirely Alanis Morissette’s fault, but her song “Ironic” didn’t do us any favors when it comes to understanding the meaning of the word. Something is ironic when it happens in the opposite way from what is expected. When you are talking about bad luck, use the word unfortunate.

When these words refer to eggs or falsehoods, most people don’t have a problem with them. It’s when you think of the words in terms meaning to recline that things get a little hinky. Do you lay or do you lie down to sleep? When used in the present tense, use the word lay when setting something down and lie when taking the action yourself. So you would lay down something you’re holding, but you would lie down on a bed. Lie is not used in the past tense; instead its past tense form is lay. Meanwhile, the past tense form of lay is laid. So you lay down on the bed earlier this evening, but you laid your phone on the table.

The rules have buckled under the convention of mistakenly interchanging these words, so literally is now somewhat acceptable when used to stress a strength of feeling even when it isn’t used to describe a literal truth. So it’s now okay to say “he was literally caught red handed” even if the perpetrator’s hands weren’t actually red. In more traditional usage, though, figuratively is the adjective you should use when figures of speech (such as metaphors or similes) are involved, and literally should refer to the exact truth, free from these figures of speech.

While many people think that these two words mean the same thing because they have to do with principles or rules, they are not actually interchangeable. Ethics have to do with rules imposed by something outside of oneself, like society or the government or your workplace. Morals, on the other hand, your own principles and ideas about what is right and what is wrong, even if these can be affected by external sources. Still confused? Think about it this way: ethics are external, while morals are more personal.

While both these words have to do with nausea, or feeling sick, they aren’t interchangeable, and chances are high you’re using nauseous (causing nausea) when you really mean nauseated (feeling nausea).

The word ultimate means the last in a series or progression of items or actions. It can also mean a final eventuality and, casually, it can be used to indicate that something is the best or most extreme of its kind. But contrary to what many people think, penultimate doesn’t mean “more ultimate than ultimate”; it is used to mean the second to the last in a series or progression. So when you say something is penultimate, you’re saying it’s second to what is ultimate.

Here’s another troublesome homophone. Something is principal when it is the first or most important in a group or selection; the word, when used as a noun, also means the person who is in charge of something (such as a school). A principle is a guideline the be referenced or rule to be followed.

Despite the way both of these words begin with the same letters, they don’t actually mean the same things. Something is redundant when it is not needed or useful; something is repetitive when it is repeated frequently or for a long time (and thus thought to be boring or tiring).

To reign is to rule or hold royal office. To rein something in is to keep something in check or to control it; this meaning is derived from the noun rein, which is a strap used to guide a horse while riding it.

Because these words sound very similar to one another, they are often interchanged. However, a god way to remember the correct usage is to think of then as rhyming with when since both words are meant to indicate time. Than, on the other hand, is used to make comparisons—one thing is more or less than another.

A travesty is represented in a false, absurd, or distorted manner. A tragedy causes suffering, unhappiness, and/or distress. The first is an insult, the second an injury.

Use the word verbal when referring to things expressed in words; this can be spoken or written. Expressing something orally means speaking it, while doing it audibly means communicating in a way that can be heard.

This is another common mistake. Use who when referring to the subject of a sentence or clause and whom when referring to the object of a verb or proposition. In other words, who is the doer of an action, while whom has the action done unto them. Still confused? Use who whenever you can use he or she or they instead, but use whom when you can use him or her or them. So you’d say, "To whom it concerns" but "Who is concerned."

The archaic yea, which is an old English way of saying yes and is pronounced like yay, is almost never used in conversation today—except in the expression “yea or nay,” which people have often misquoted as “yay or nay.” Yay, a contemporary word used to express excitement and approval over something, might work contextually, but if you’re using the idiom correctly, yea is more appropriate.

More From FemaleNetwork.com
Get the latest updates from Female Network
Subscribe to our Newsletter!
View More Articles About:
Evergreen Grammar Words
Trending on Network