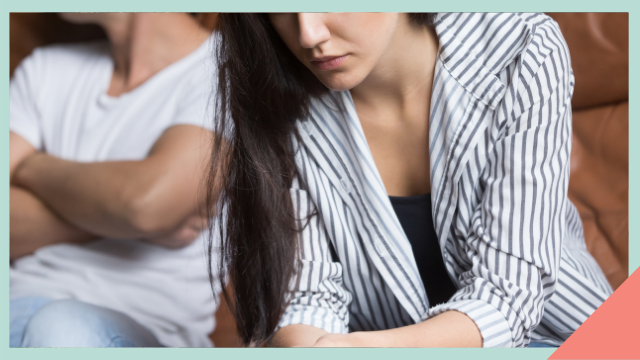 Have you ever experienced a really bad breakup and wondered, "Where did it all go wrong?" If you're wondering if you missed any big signs that scream "They aren't the person you thought they were!" you're not alone.

Cosmo.ph asked their Cosmo Community on Facebook for the relationship red flags they wish they paid more attention to, and here's what they had to say:

"He would always have something for me...a gift...a coffee...he even bought me [a] new pair of shoes...at first, I thought it was so sweet...then, I found out he has seven credit cards. He had financial issues towards the end of the relationship and he kept saying I was so high maintenance that's why he is in great debt." - Magen

2. "He got mad at me for making surprise visits [to] his workplace."

"My previous ex was way older than me. He's nine years older and all along I thought he was always right and I'm always in the wrong because I was much younger. When he got mad at me for making surprise visits [to] his workplace (we were workmates before), I knew that something was off there but I just kept on denying it by saying, "It's because he doesn't want issues or misunderstandings about us." But it wasn't the case because if your partner makes a surprise visit [to] your workplace, you should be happy, right? The next time I did it, he dumped me via Messenger.

A few months after, I found out he was cheating on me with the HR manager (who's already in a relationship) and even played the victim regarding our breakup. He was like, "I broke up with her because she's so immature and she doesn't understand my work hours, etc." He even shared a post about it on his FB account and since it was public, I commented a screenshot of his reason why we broke up and my caption was: "Ang alam ko kasi ako yung theatre actress kaya bakit pa-victim ka?" After that, the HR manager dumped him." - Sandra

3. "[He was] not a fan of video calls, voice calls, and not the best in replying.

"[I was in a] long-distance relationship with a guy who's not a fan of video calls, voice calls, and not the best in replying. For someone who's paranoid about being ghosted, I still don't understand how I could be so dumb and stay. But [the] last straw was when he was doing a disappearing act...I thought he was just busy until I saw that he uploaded IG stories that were hidden from me. And he was with that girl-space-friend that I had a feeling was into him. (I don't even think the girl knew about me.)" - Tasha

4. "People who don't acknowledge/accept your love language" are not the right one for you.

"[I] wasn't in a relationship but it would've helped a lot if I learned early on that people who don't acknowledge/accept your love language, no matter how 'good' of a person they are to you, is a sure sign that they're not the right one for you. Worse if they brush it off or say stuff like, "I'm just not the kind of person who does that."" - Kaye

5. "[He cheated, and]I was so stupid to forgive and give him a second chance."

"[I was in a] long-distance relationship with a guy who's always busy. He's in pre-med, so that was a given for him to be busy especially during exam week. So, during his exam week, he rarely messaged me, so I thought maybe he's reviewing since I understand how demanding his course was. He was getting busy with another girl na pala and his classmates knew about them already. Take note, they all know me. I never confronted him about it but I kinda had hunches. He then told me everything two days after Christmas. He explained what happened between them. And I was so stupid to forgive and give him a second chance. And so, we grew apart and decided to break up two years after what happened." - Charisse

6. "He did not actively carve out meaningful relationships with others. I was his world."

"[I was in an] LDR. He was super duper clingy. Like, if I missed out on my lunch/his dinner "date" it would be taken against me. That he also did not actively carve out meaningful relationships with others should have been another red flag. I was his world. I was swept off my feet [and] I said yes when he said we should get married. But then, he wouldn't involve me in the talks on finances. Being the breadwinner meant I need to have solid financial backup plans should I have migrated to his country. Instead, it became a source of conflict as asking about plans meant, to him, that I didn't trust him. I also belatedly found out that he downplayed the extent of drama in his last relationship, his use/abuse of legal drugs. It was a very dramatic relationship and I am so so so glad to have dodged a major bullet." - Vee

ADVERTISEMENT - CONTINUE READING BELOW
Get the latest updates from Female Network
Subscribe to our Newsletter!
View More Articles About:
Syn-00292 Relationships Striving
Trending on Network