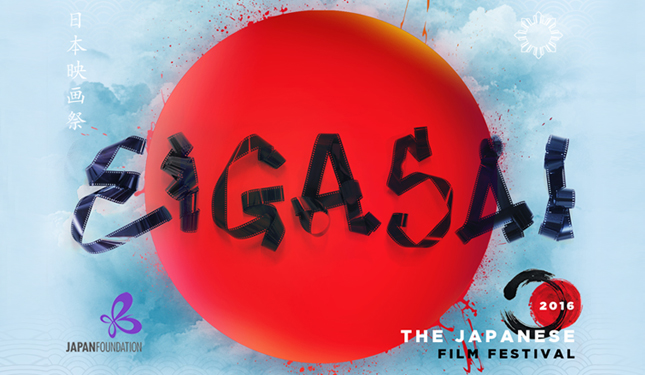 Eiga Sai, which literally translates to "film festival", is a yearly showcase of Japanese movies organized by the Japan Foundation, Manila. Launched in 1997, it is now known as one of the largest foreign film fests in the country, attracting thousands of audiences every year with various stories of people from all walks of life.

Whether you're a cinephile or someone who just needs a break, here are a few reasons why you should go to a screening once the season opens.

1. It's FREE.
Yup, it's that magical four-letter word. Eiga Sai has always been, and still is, free for every one and anyone interested to see quality Japanese films, and as such, theaters may get full right away, so it's best to plan your screenings and to be in the venue early.

2. It runs longer.
In the past, the festival would only run for a couple of weeks. This year, Eiga Sai will run from July 7 to August 21 in Manila, Baguio, Cebu, and Davao. That's more time for you to catch free movies!

3. It features an anime film.
For those who are fans of anime, this is the Eigasai year for you. The line-up includes "The Boy and the The Beast," a story by director Hosoda Mamoru, who also gave us the cult classics "The Girl Who Leapt Through Time" and "Wolf Children"..

4. It features a Japanese film shot in the Philippines.
From the streets of Baguio to the terraces of Banaue, "Crossroads" by Junichi Suzuki will show you how home looks like through the eyes of a foreigner. (FYI: Filipina cosplayer Alodia Gosiengfiao is part of the cast.)

5. It basically has a very solid line up.
Aside from the two that have been previously mentioned, Eiga Sai 2016 will showcase an array of films dealing with topics such as love, family, and morality, including "Flying Colors," "Our Little Sister," "Pale Moon," "The Great Passage," and "The Little House."

6. It includes talks from two prominent Japanese directors.
Eiga Sai will kick off with the screening of "Kakekomi," and a short talk from its esteemed director Masato Harada, who also portrayed the character of Omura in the Hollywood film "The Last Samurai." Hiroshi Shoji, director of the award-winning film "Ken and Kazu" will also be joining the festivities.

7. It's the first Eigasai that the Japan Foundation celebrates with its newest partner, Cinemalaya.
In honor of this partnership, there will be a one-time screening of "The Emperor in August" by Hiroshi Shoji at the CCP Tanghalang Aurelio Tolentino come August. Being allied festivals, Eiga Sai and Cinemalaya aims to continuously uplift film as an artform in both countries.

Travel
A Tribute to the Man Who Loved Us First