Celebrities Mourn Over Victims of the Mass Shooting in Orlando 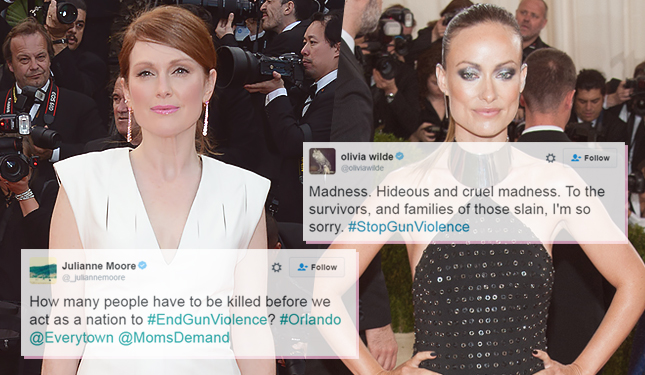 Authorities have named Omar Saddiqui Mateen as the suspect who opened fire with an assault weapon at gay hotspot Pulse in the early hours of Sunday, killing 50 and injuring 53 others.

The tragedy, now dubbed the deadliest mass shooting in U.S. history, has prompted outcry among gun control activists, including Oscar winner Julianne, who took to Twitter.com to express her horror at the latest mass shooting incident to rock the U.S.

"How many people have to be killed before we act as a nation to #EndGunViolence?" she asked, before calling on followers to lobby politicians to enact change. "Email or call your Representative and ask them why they have done nothing to #EndGunViolence #Orlando".

How many people have to be killed before we act as a nation to #EndGunViolence? #Orlando @Everytown @MomsDemand https://t.co/UBeBearjF2

Actress/rocker Juliette Lewis echoed Julianne's sentiments, posting, "Thoughts go out to everyone who lost their lives and suffered in #PulseNightclubShooting #Orlando Beyond sad. #StifferGunLaws please", while singer and new dad John Legend wrote, "Horrified by the mass shooting in Orlando. When will we do something to prevent these killing sprees?".

Horrified by the mass shooting in Orlando. When will we do something to prevent these killing sprees?

Pregnant Olivia Wilde tweeted, "Madness. Hideous and cruel madness. To the survivors, and families of those slain, I'm so sorry. #StopGunViolence", as Christina Applegate exclaimed, "Oh my god! My heart is broken. Why do we keep doing this?", and Reese Witherspoon added, "I'm heartbroken by this tragedy. Praying for Orlando and the suffering created by this senseless violence."

Madness. Hideous and cruel madness. To the survivors, and families of those slain, I'm so sorry. #StopGunViolence

"Love love love and absolute sadness to those families of those lost to the insanity," wrote Game of Thrones star Lena Headey, who added multi-coloured heart emojis to her post and the hashtag "#GunControlNow". And Alec Baldwin mused, "I don't have anything original here. Just, what's it going to take to bring us sensible policies? #Orlando"

Openly-gay actor Sean Hayes also marked the sad news online, writing, "My heart goes out 2 (sic) the families & friends of those who lost their lives in Orlando last nite. A sad, horrific day in US history," while pop star Ariana Grande stated, "so. much. violence. it hurts my heart. sending as much Light and love as I possibly can to anyone and everyone I can possibly reach."

Meanwhile, former Ugly Betty star Michael Urie honoured the victims by changing his Twitter profile picture to an icon of a rainbow with 'Orlando' written over it, and urged locals to donate blood to help those injured in the club horror as medical officials there was an "urgent need" for O negative, O positive, and AB plasma blood donors.

"Straight allies of Orlando please give blood - gay and bisexual men are forbidden," Urie told followers. "#orlando Please take care of each other."

Police chiefs are investigating the club horror as an act of terrorism, suggesting 29-year-old Mateen, who was killed in a subsequent shootout with cops, had "leanings towards" radical Islamic teachings.

The shooting at Pulse nightclub is the second tragedy to rock Orlando in just two days after former The Voice contestant Christina Grimmie was shot and killed following a concert at the Plaza Live Theater on Friday night.

A man armed with two guns walked up and fired at her, before shooting himself as the star's brother Mark tackled him, and was pronounced dead at the scene. Christina was rushed to the Orlando Regional Medical Center, where she was later pronounced dead.

ADVERTISEMENT - CONTINUE READING BELOW
Get the latest updates from Female Network
Subscribe to our Newsletter!
View More Articles About:
News News And Features Florida Mass Shooting
Trending on Network

Features
Does Your Period Make You Gain Weight?