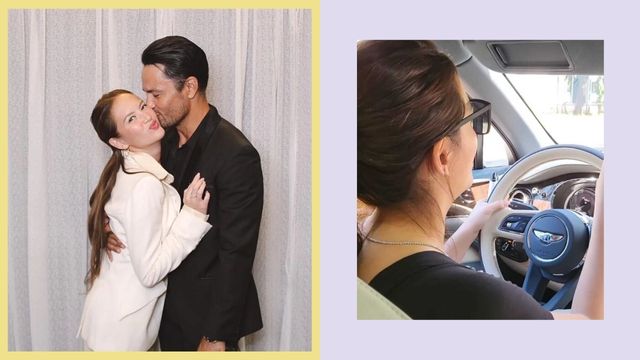 After almost a year since their much-talked-about nuptials, Derek Ramsay and Ellen Adarna’s relationship continues to be headline-worthy. The topic this time around? Derek’s anniversary gift for Ellen, which just happens to be a sleek and shiny new luxury car!

For their upcoming first anniversary, the 45-year-old actor presented his wife with a Bentley SUV, which Ellen took for a spin herself.

“Advanced happy anniversary to the love of my life,” Derek captioned his Instagram post, which featured the couple and Ellen’s son Elias. “Thank you for giving me so much love. I've really found true happiness.”

In the IG video, Derek asked the actress for her thoughts on the surprise, as she took the new vehicle for a test drive. Ellen jokingly replies, “You’re the one driving. I need a driver more than a car!”

The sweet couple proves that grand gestures can go beyond the honeymoon phase. The anniversary gift in question is the Bentley Bentayga S, with Ellen’s ride coming in a unique baby blue colorway. Known for its eye-catching design and stunning craftsmanship, the luxury SUV also comes with a whopping base price of $222,525—that’s approximately P12,680,000!

“I like it but you know my love language [are] physical touch and quality time soooo your hugs and kisses are [my] number one. I love youuuuuu,” reads Ellen’s response to Derek’s post, which she caps off with a cheeky comment. “I know you’ll enjoy driving my car nyahahhahahahahahahahahahahah.”