We love her take on leading lady style!
by Isha Andaya-Valles for Preview.ph | Feb 29, 2020

So how are you doing on your first week after the Crash Landing on You finale? Did you rewatch the whole series together with those binge-watching for the first time? Did you drown your sorrows in a box of Korean fried chicken, maybe?

Well, we're particularly fond of how Jen Gerodias-Diaz, founder of local beauty brand Snoe Beauty, has been coping. She’s released a series of OOTDs on Instagram reliving some of her favorite fashion moments from the show. From Yoon Se-ri’s paragliding jumper to Seo Dan’s clipped hairstyle, we’re learning a thing or two about how to extend the fun of a favorite drama.

We caught up with Jen for a peek into why and how she did it. Scroll down to see all her looks below, too!

What about the styling of the female leads in CLOY appealed to you? Between Yoon Se-ri and Seo Dan, whose style do you identify with more?

I like layers and long dresses. These are staples in my closet. I also like wearing winter clothes and going to cold countries. In fact, when I travel to colder climates, I would wear dresses but layer it with cardigans, coats and scarves to keep me warm. Though people say that I look like Se-ri, in terms of fashion, I actually identify more with Seo Dan because her outfits are more colorful. I particularly like that the silhouettes she wears have more volume and she uses accessories to make her look interesting. Since I go to the office daily, I decided to pick up Se-ri’s work outfits like the black suits and the blazers. I also remembered my daughter has a jumpsuit, and wore it as if it was a paragliding outfit.

Did the drama influence your recent fashion purchases or did you shop your closet for the outfits you posted?

I didn’t purchase anything when I posted my CLOY-inspired outfits. Most were just taken from my clothes storage. I already have those items so it was just a matter of looking for the key pieces. Actually CLOY was the first K-drama that I did not binge-watch. Usually, I would wait for the series to end before I start watching because I don’t want to feel bitin. So when CLOY ended, I was still hyped up like everyone else closely following the series.

TIP: Loving Seo Dan’s polished ‘do as much as us? Add polish to your mane and a printed maxi dress with a similarly delicate clip.

Where did you wear each of these looks? Did the people you were meeting notice it was CLOY-inspired?

I wore [my version of] Se-ri’s outfit (black suit) to the office. Since most of my staff know I love K-dramas (way back to my Goblin days), they automatically figured out that I was channeling Se-ri.  The way I did my makeup and hair that day was like Se-ri’s too. When I posted the photo on IG, most of them said that I kinda have that Se-ri vibe. I wore the jumpsuit at a work photoshoot. Again my staff complimented me for my brilliant version of a paragliding outfit. People were telling me that they couldn’t wait to see what I’ll be wearing the next day. So it got me really excited to continue wearing CLOY-inspired outfits.

TIP: All-black is always a foolproof choice, but mixing rich textures like pleats, leather, and silk elevate the look instantly.

How did you get your husband to pose as your Ri Jeong-Hyuk for a photo?

Early that day, I told my husband Noel to just wear an all-black outfit (my husband does not own a black turtleneck). I took a gray jacket from his closet too. He didn’t know that I was planning to include him in my CLOY photo! Lucky for me he was so game about the whole thing. He usually takes my IG photos. Sometimes I would include him in my photos when we’re matchy-matchy.

TIP: You’ve got your blazer, bag, and clip ready. Now all you need is for your S.O. or a fun friend to complete the scene.

Has any other K-Drama inspired your style in the past? What’s the most important thing to keep in mind when a film or drama inspires your style?

Out of all the series I’ve watched, CLOY was the best one for me, even surpassing Goblin. I was constantly talking about it with friends, and we would have conversations on how it would end. That led me to channel my CLOY-fever into my outfits for several days. Whenever I watch a K-drama that I find very interesting, I would wear 1 or 2 outfits inspired by the lead actress. An example would be Hotel del Luna. Man-wol (the lead female character) wore long dresses and they were all very pretty. That would remind me to wear my long dresses too. When I traveled to Spain last year, I went to see Alhambra because of the K-drama Memories of the Alhambra. In the drama, Park Shin Hye wore a flowy dress and drop earrings. I wore something similar during the trip. When I watched What’s wrong with Secretary Kim, I copied Kim Mi-So’s style of wearing long drop earrings.

When you get inspired by a drama, it’s not just about fashion. For me, it’s like being in character. So I also pay attention to details like makeup and hairstyle. For example, I usually wear my eyebrows high but changed it to lower, straighter brows like what most Korean actresses do. Instead of my usual winged eyeliner, I lined it lower. I also part my hair in the middle but changed it to a side part and put on a barrette. You don’t have to wear the exact same outfit. You just have to exude the character or the mood.

Once the drama ends, just have fun with it through fashion and styling. Just pick up the nice things and positivity from the drama. I like watching K-dramas because the stories are nakakakilig. Since I’m married, it helps keep the romance in my marriage going.

Get the latest updates from Female Network
Subscribe to our Newsletter!
View More Articles About:
Thriving Korean Style Korean Fashion K-dramas Crash Landing On You Syn-00292
Trending on Network 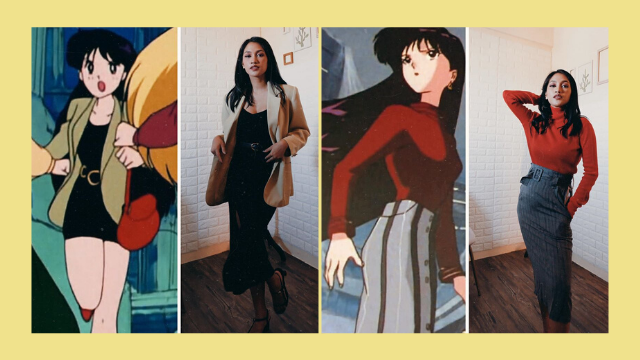 Fashion
This Pinay's Sailor Moon-Inspired OOTDs Are Perfect for Work