Netizens are calling out the show for not getting their facts straight.
by The Cosmo.ph Team | Sep 14, 2022 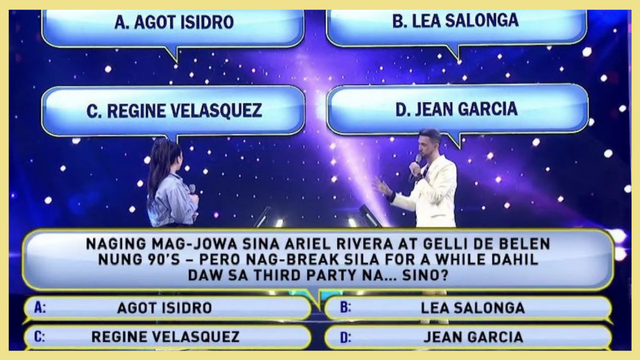 Just recently, its infamous “Maritest” segment caused quite the drama once again when it tackled another showbiz issue concerning Regine Velasquez and her alleged third-party involvement in Gelli De Belen and Ariel Rivera’s relationship.

Choices that were flashed include Agot Isidro, Regine Velasquez, Lea Salonga, and Jean Garcia, who were all popular actresses of their time.

Of course, The Asia’s Songbird was the obvious answer to the question, given that the issue was of common public knowledge. On Twitter, netizens cried foul over the show’s insensitive decision to revive the decades-old controversy.

Some fans even called out the show for not getting their facts straight, defending the singer by unearthing a couple of clips. In the videos, Regine’s dad Gerry and TV host Boy Abunda disclosed in separate interviews that they were witnesses of the fact that Ariel courted Regine.

Although it was never confirmed that Regine was a third party or if she and Gelli dated Ariel at the same time, she clearly harbored some bad blood with her fellow actress, which they settled years after. During their talk in 2003, Regine admitted that Ariel broke up with her because he still has feelings for Gelli. She told her, “Gelli, he broke up with me because he said he loves you. He admitted it to me that he loved me but he loves you more that’s why he’s with you,” she said.

"Thank you, finally natanggal na ‘yung galit mo sa’kin kasi alam ko ‘yung totoo, parang hindi din ako natuwa na nagalit ka sa’kin. And I also did not mean to hurt you and you have to know that. I just also fell in love. But now that it's over, it's finished, I’m glad that you're also moving on."

As of writing, TV5 has yet to issue a statement about the issue.