The Backstreet Boys Are Coming Up With A New Album! 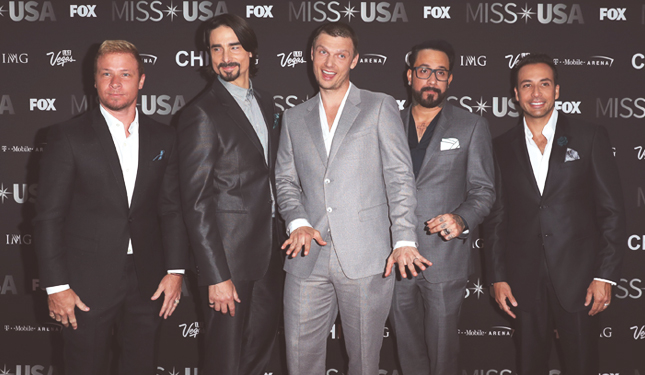 The Backstreet Boys are going country with a new collaboration with Florida Gerogia Line.

The Cruise duo is releasing its third studio album, Dig Your Roots, in August, and Brian Kelley and Tyler Hubbard have unexpectedly recruited the boy band to feature on one of the tracks on the record.

Nick Carter took to Instagram on Monday to reveal the news, posting a selfie of him in the recording studio, where he and the other Backstreet Boys have also been laying down tracks for their next album.

Nick wrote, "In the studio with my @backstreetboys recording a song for @flagaline new album. Also working on the new backstreet album as well. Get ready!!!"

His bandmate Brian Littrell added his own post, writing, "In the Lab...... Doing something we've never done before.... BSB feature with FGL..... Great record.... Comes out late August."

The collaboration comes after Florida Georgia Line professed their admiration for the Backstreet Boys during a gig last month, when Kelley revealed they were his first concert.

His confession was met with a few laughs from the audience, but Hubbard then went on to admit one of the boy band's records was the first one he ever purchased, adding, "BK (Brian Kelley), sometimes I think that we are the Backstreet Boys."

The duo went on to do a cover of the group's hit "Everybody (Backstreet's Back)," which got the attention of Nick Carter, who praised their version.

Nick even met up with the duo earlier this month at the CMA Festival in Nashville, and praised their set with a post on Instagram.

"Enjoying an amazing concert at CMA fest where my boys from @flagaline killed it on stage," Nick wrote. "Best performance of the whole show."

The Backstreet Boys have yet to announce a release date for their next album.