Melissa Ricks on Having No Regrets as a Single Mom: "We are a happy family of two" 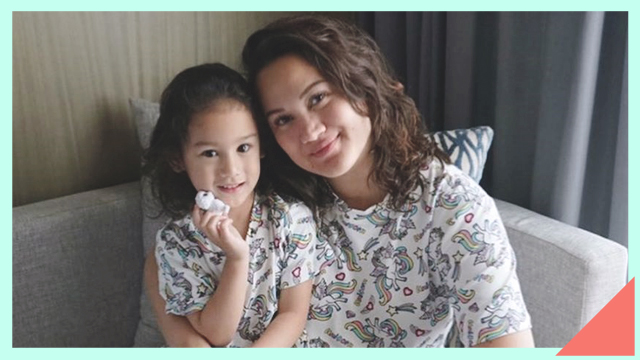 The Star Circle Quest alumna Melissa Ricks has come a long way from that period in her life she once described as "lowest of the low."

It began just before she gave birth to her daughter Kiera on January 12, 2015.

In an Instagram Live session with life coach Kimilu on June 9, 2020, Melissa reveals that she was struggling with the reality she was about to become a single mom.

She says, "Ayoko i-open up, so I kept it to myself... I didn't want people to know na I'm a single mom o nahihirapan ako. I was in an angry state because I didn't think that my life would end up that way.

"It was never the picture that I was gonna end up a single mom, and I knew it was going that way. Papunta na doon, e. I just had to make that choice."

The choice facing Melissa was whether she would or would not stay with Charles Togesaki, her then boyfriend and father of Kiera.

Melissa did not believe that getting married was the solution. She recalls, "People would say, 'O, kailan kayo ikakasal? Buntis ka na o may anak ka na. Kailan ka ikakasal?'

"I'm like, 'Will marrying someone solve my problem or will it make it worse?' Case-to-case basis kasi iyan, e. Depends on your partner...

"But, you know, it's what you can tolerate, e. It's your values, e. What you will tolerate and what you will not. If you want to live that way for the rest of your life.

"For me, I took that choice of leaving and letting it go because I thought it was best for me and my daughter."

Letting go for the sake of Kiera

According to Melissa, she prayed hard for guidance. She says in the livestream interview, "Sabi ko, 'Lord, bigyan mo ako ng sign' because I'm not the kind of person who will quit agad-agad.

The sign Melissa was waiting for came by way of a conversation with one of her closest friends.

"When [my best friend] said that you don't deserve to be in the situation, and he cried, that was the time na I'm, like, 'Teka lang Mel, we need to think about the future of you and your child.'"

Melissa remembers, "At that point nung buhay ko, pinabayaan ko na iyong sarili ko. I wasn't happy. I was always angry. I was disappointed with myself. I didn't feel like I deserved anything. Parang it was a lowest of low. And when you're at your low point, if you cannot take care of yourself, you will not be able to take care of the people you love.

"So, ang akin ha, ang akin, unahin mo ang sarili mo so that you can share the love with others. That includes your child. Kasi kung masaya ka, your child can feel that.

"Kapag malungkot ka, you're miserable and you're crying and you're angry. Your child can also feel that pain and you don't want them to feel that. Iyong ginagawa mong self-love ay hindi lang para sa iyo, para rin sa anak mo."

Telling Kiera about the separation

At the moment, Melissa is waiting for Kiera to get older before she tells her the full story of their family situation.

In the meantime, she believes they are doing just fine as a family of two.

Melissa says, "I think nagkaka-isip na siya. She's starting to get the point na I'm trying to build a happy family for her. And she has a happy family as well with her dad... It's hard in the beginning, but you just have to push through."

Entertainment
10 Korean Actors and Their Most Iconic Roles