At this point, AJ Raval has become nonchalant about the issues thrown at her, especially after being the subject of bashing for her controversial romance with Aljur Abrenica and for being the alleged ‘third party’ in Barbie Imperial and Diego Loyzaga’s relationship.

This time around, it’s for her recent movie with Vivamax entitled “Hugas” that's been drawing flak. The film, which tells the story of ex-gang members who ran away from their boss after pocketing loads of cash, drew flak online for its sexually explicit scenes.

“I don’t mind films that have sex in it. But a film that just rely on sex scenes? I mean, c’mon. At least read the script before taking it? Sayang talent,” one Twitter user wrote, shortly after AJ Raval skyrocketed on top trending topics.

Someone took to AJ’s defense, questioning why the actress is being slut-shamed for her daring portrayal when so many other sexy stars have been on the same track before. 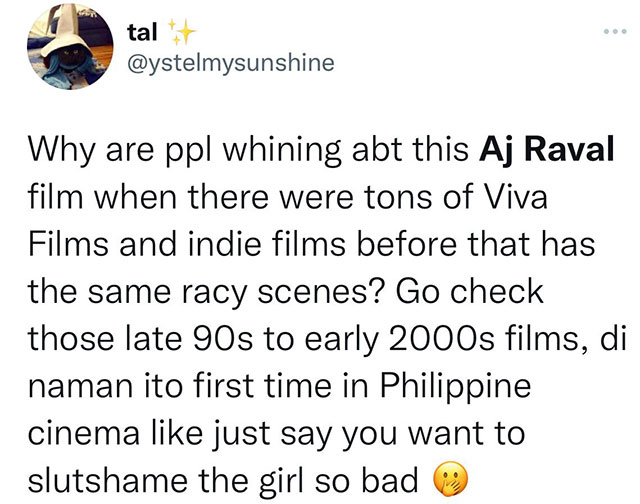 AJ has kept mum about the issue and has been continuously promoting the film on her social platforms. She did, however, reposted an article about her on Facebook, slamming slut-shamers for focusing their criticisms on AJ when her male co-workers aren’t receiving the same pushback.

The young actress also shared how proud she is to show her movie “Hugas” to her dad, especially the action-packed fight scenes in the film. She shares, “Malakas naman loob ko na ipanood ko siya sa tatay ko. He was happy about it. It’s like this is the first time that he felt proud of all the projects I’ve done. Because this is an action movie, sinuportahan naman ng tatay ko. And his feedback is very important to me.”

Entertainment
Heart Evangelista Answers Netizen Who Asked Why She Doesn't Have Kids: 'Not your uterus'