Following Aljur Abrenica's controversial post about his separation from Kylie Padilla, AJ Raval's mom Alyssa Alvarez took to Facebook to thank the actor. Ever since AJ Raval admitted that Aljur is courting her, the actress has been the subject of hate comments. She has also been accused of being the third party in the couple's relationship, which she strongly denied.

In her post, Alyssa wrote that Aljur told her everything from the start, and that's why she "kept her mouth shut." She says she didn't say anything even when people were belittling her daughter and her family, because she knew the truth would come out eventually. "Nagpapasalamat ako 'anak' kasi tinupad mo ang sinabi mong di mo kami pababayaan. Alam ko hindi lang ito para sa amin, pati na rin sa mga taong nagmamahal at nasasaktan para sayo..." 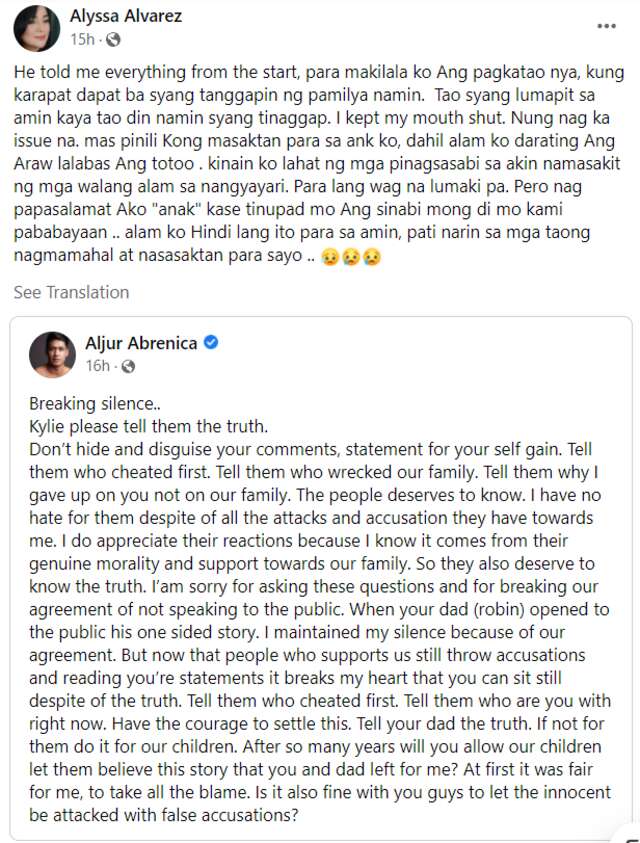 What happened to Aljur Abrenica and Kylie Padilla?

In February, Kylie's cryptic Instagram posts sparked breakup rumors, and in July, Kylie's father Robin Padilla revealed that Aljur and Kylie split up, that Kylie was the one who broke up with Aljur, and that Aljur was unfaithful to his daughter.

Kylie announced their separation soon after this. She maintained that they would not be sharing the details of their breakup with the public and that they were focusing on co-parenting their two children. She also said in an interview that she wanted Aljur to be happy and that there was no issue with him dating other celebrities.

Aljur broke his silence last night, October 19, when he penned a lengthy Facebook post to Kylie, asking her to "tell the truth." Part of Aljur's message reads: "Tell them who cheated first. Tell them who wrecked our family. Tell them why I gave up on you, not on our family. The people deserve to know."

Kylie seemed to respond to his post by sharing a series of Instagram Stories, one of which is a quote from Rihanna which reads: "Never underestimate a man's ability to make you feel guilty for his mistakes." 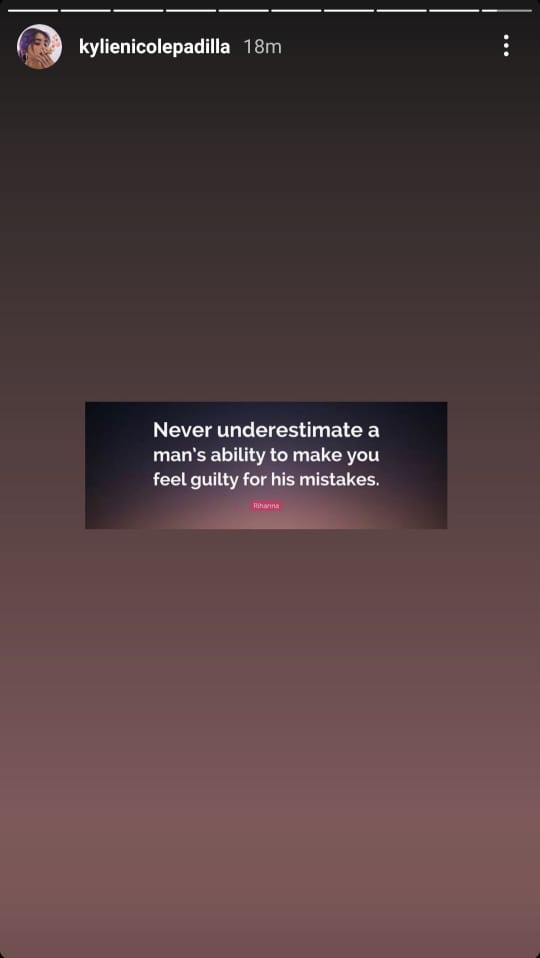