A Quick Recap of Kris Aquino and Herbert Bautista's Relationship

It all began when local showbiz tongues kept wagging about the perceived closeness of Kris Aquino and Herbert Bautista. And then Kris decided to set the record straight by confirming their relationship on national TV. However, just like all love stories, the couple encountered bumps on the road. Read on to reminisce the short-lived Kristek love affair.

April 5, 2014: Kris posted a photo on her Instagram account of her family having dinner with Herbert with the caption, "Family Dinner ♥ ♥ ♥." She deleted the photo two days after. 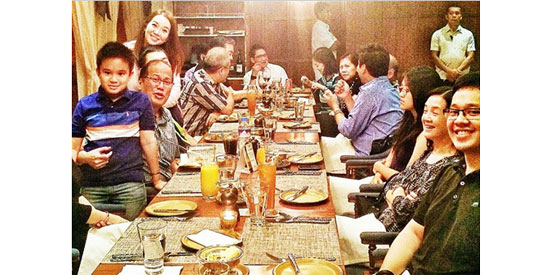 April 7, 2014: After a few weeks of speculation of a developing romance, Kris announced and confirmed on her show, Aquino and Abunda Tonight, her relationship with the Quezon City Mayor with an official statement: "Herbert and I are partners in either the failure or success of our being together. And we can strengthen what we have by allowing ourselves to have a chance at forever by keeping quiet and private about what is here and now."

Before Holy Week: There were reports that the children of Tates Gana, Herbert's allegedly former live-in partner, were upset when they learned that their father was pursuing another woman. Although ABS-CBN News says the couple broke up last 2003, they still appear in events together.

Then she posted a quote about a hair makeover. It had caption that says, "I cut off more than a foot, so I'm super ready for my life change!"

April 22, 2014: Kris appeared on Aquino and Abunda Tonight sporting a pixie 'do. She has never gotten a haircut this short. When asked by Boy Abunda, she answered, "Ayaw ko na ng heartache, iyon lang."

April 23, 2014: After getting rushed to the hospital due to dehydration, Kris thanked Herbert on Instagram for sending her energy drinks.

She also confirmed in her caption that she and Herbert may not be a couple, but they are the best of friends. On her show that night, she insisted that she wants to keep her friendship with Herbert, so she'll stop talking about it.

We wonder what's the next chapter for Kris and Herbert? Would they get together again, or will they settle to be just friends?