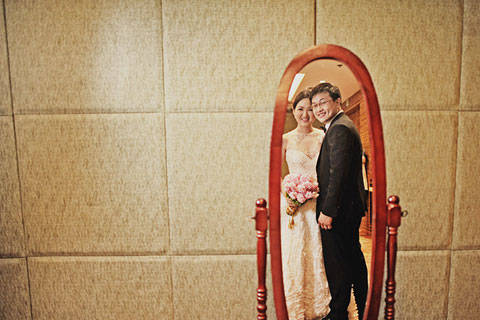 Meryll and Carl paid homage to their Chinese roots by having a Chinoiserie-inspired wedding. The classic celebration showcased Eastern and Western details in the couple's motif, pink and green.

Want to know more about Meryll and Carl's story? Click on any of the following links:

Meryll and Carl were both part of the team for planning the prom on their fourth year in high school. Their involvement in the team allowed them to spend time together, and soon enough, Carl started calling Meryll up. He would ask her about their homework, despite the fact that they belonged to different sections. After high school, the two both went to De La Salle University, and their romance blossomed.

On their eighth anniversary, Carl drove Meryll home after their dinner date. Upon reaching Meryll's house, Meryll immediately went upstairs to watch television. Little did she know that Carl had connived with her sister to hatch a special plan. Meryll's sister called her to the balcony overlooking the garden, and when Meryll went out, she saw paper bag luminaries set up at the garden. The lights spelled out "Will you marry me?". Carl knelt down to pop the question, to which Meryll gave a sweet reply.

For their wedding, Meryll and Carl wanted to honor their Chinese roots with a colorful celebration. The couple decided on a Chinoiserie theme, which featured a combination of Chinese and European styles. A pink and green palette exuded a fun vibe at the couple's reception.

In line with their theme, Meryll and Carl incorporated Eastern and Western details into various wedding elements. The couple served a Chinese lauriat, and had a bilingual host for the reception program.

The couple had seven months to prepare for their big day, and the bride shares that planning was easier than she had been told. She says, "At first, people were scaring me--that I will not have ample time to prepare, I might not be able to get a church, a good reception, and wedding suppliers. But that's not actually true. There are a lot of good suppliers out there! Check their works on the Internet." Looking at weddings of other couples also helped the bride. "It would be more realistic for the soon-to-weds to view more weddings of common couples rather than the celebrity ones. Celebrity weddings are the nicest and grandest, so it is better to evaluate the works of the wedding suppliers though real couples," she adds.

Watch now
Back to main page
Read about their love story
Get the latest updates from Female Network
Subscribe to our Newsletter!
View More Articles About:
Trending on Network