This Davao wedding proved to be a warm, personal, and intimate affair.
by Keisha Uy | May 3, 2011 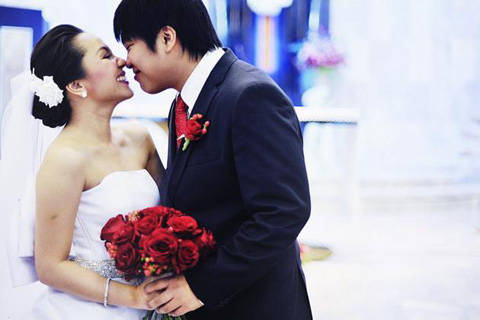 Melen and Jeri proved that their love can withstand the test of time and distance by finally tying the knot. Their destination wedding's classic red and champagne motif matched their wedding's warm, personal, and intimate vibe.

Want to know more about Melen and Jeri's story? Click on any of the following links:

Melen and Jeri met as college students at De La Salle University. They started out as friends but eventually developed a romantic relationship. Melen admits that their relationship wasn't an easy one because at one point, Jeri had to move to the United States for work. At the same time, Melen had to move back to Davao to manage their family business. In 2008, they decided to break up.

The couple lost touch for a year. "Then in May 2009, I heard from him. He called up my dad, and asked for permission if he could visit--and he did. I wasn't convinced [that we should pursue our relationship], and I wanted to be just friends. [But] he persisted," shares the bride.

Melen was due to leave for Manila on July 24, 2009. But on the morning of the 23rd, Jeri called her to say that he sent her a package through their common friend who was in Davao at that time. She then received a text from her friend, who set a meeting with her that night at the Marco Polo Hotel.

When Melen got to the meeting place, the friend texted her again. The friend asked Melen to go up to her hotel room to meet her parents so that she'll be allowed to go out. Melen agreed to her friend's request--and as she approached the hotel room, she heard music coming from the room. She hesitated at first, but when she finally decided to go in, she found her and Jeri's favorite song, The Distance by Evan and Jaron, playing in the background, rose petals scattered on the doorway, even more red flowers around the room, a table for two, and a bottle of champagne.

"[On] the bed, there were three beautifully wrapped boxes and a Minnie Mouse bride stuffed toy--a gift I gave Jeri from Disneyland in 2004. He [promised to keep it] until he proposes. The toy was sitting on three boxes which had a note that said ‘Open the boxes and call me--1024' (our anniversary). Not finding anything in the box, I called him, [then], he came out from the veranda of the room and proposed to me," the bride fondly recalls.

Melen and Jeri had an elegant red and champagne gold themed wedding, held in the bride's hometown and the couple's proposal setting: Davao. The couple was hands-on with the planning, and they were very particular with the details they wanted to see on their big day. The couple just needed to find the right suppliers that can execute all their ideas well.

Most of the couple's guests and suppliers were Manila-based, and so the couple provided maps, itineraries, transportation services, a local guide, and accommodations.

The couple also assigned a point-person to facilitate everything on the wedding day. "On the wedding day, we were really relaxed because [we gave the staff] instructions. They were [provided with] their own car, assistants, their [areas of responsibilities], and everything else that they would need," shares the bride.

To pull off their sophisticated destination wedding, the bride shares that she and Jeri "made a monthly timeline of all the things that we needed to accomplish, and we stuck with [the schedule]. We had time to pick out [various wedding details], choose good and reasonable suppliers, while continuing to work, supervise our house construction, and plan our honeymoon." 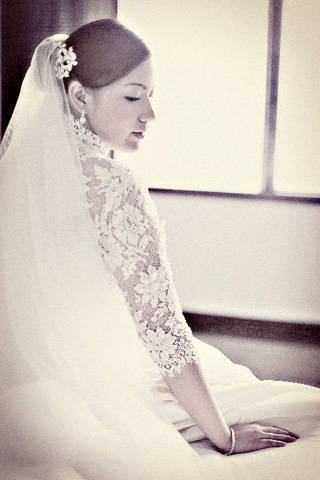 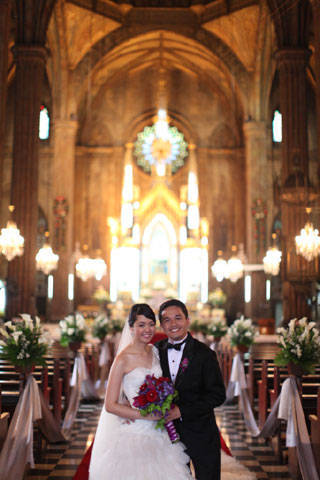