This backyard wedding had all the makings of a perfect feast.
by Keisha Uy | Feb 7, 2012 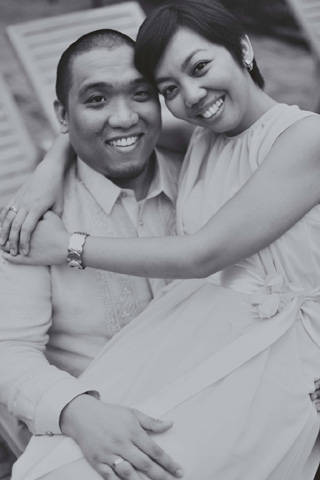 Long-term sweethearts Lala and Jerome celebrated their union with a one-of-a-kind affair marked with lots of DIY projects, multiple feasts, a laidback ambiance, a rustic setting, and eco-awareness.

Want to know more about Lala and Jerome's story? Click on any of the following links:

Lala and Jerome met through Youth for Christ (YFC), a Catholic community for the youth. They became band mates in YFC, where Jerome was the drummer and Lala was the lead vocalist. The two eventually developed romantic feelings for each other and became a couple, and their connection allowed their relationship to flourish for 13 years. "We are best friends in the truest sense of the word. Those who know us were just so happy that we ended up together," says Lala.

With such a strong bond, Lala and Jerome did not think that they still needed a grand proposal or a fancy engagement ring to get married. "We just decided one night that we want to get married since we've been together for 13 years, and we didn't want another day spent away from each other," Lala shares. But Jerome still surprised Lala with a ring. Lala recalls, "I just came from a trip abroad, and he picked me up from the airport.While I was sleeping in his car, he got my hand and put something on it. It was a jewelry box so I was surprised. And inside was a ring--an heirloom--from his grandmother."

"Offbeat!" Lala and Jerome say of their wedding. A day after exchanging I do's before a crowd of 25 people, the couple held a thanksgiving mass at a backyard, and then hosted a laidback, fun-filled feast afterwards. They wanted to keep the costs low, so they decided to do away with some wedding traditions, such as having an entourage, and just focused on making their big day special for them and their loved ones.

The couple's unique celebration was a harmonious mixture of a fiesta vibe, a foodie experience, a rustic backyard setting, DIY details, and an eco-friendly advocacy. With only three months to prepare, the couple maximized all the help they could get to pull off their dream wedding. The décor were all put together by the couple's family and friends. Lala and Jerome also used  recycled materials for some of the details. Moreover, they only printed a few copies of the invites, and just sent online invitations to the others. They even encouraged a carpooling system for their guests, as their venue was located in Cavite.

In addition, the couple satisfied their guests' appetites by having three feasts prepared. First was merienda, followed by cocktails and desserts, then a Russian-style buffet dinner. The well-fed guests were also treated to entertaining serenades by troubadours, which complemented the wedding's festive air. Indeed, the couple's affair was one big celebration of love and happiness. 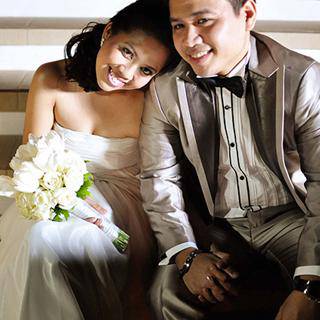 Real Weddings
Life and Love through the Lenses of Nez Cruz