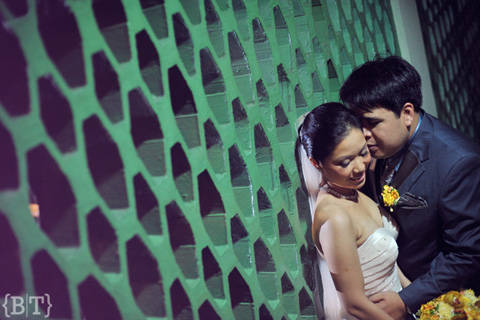 Eree and Chuck wanted to put a unique spin on their wedding, and so they incorporated pandas into most of their details. With a yellow and blue motif, the couple's celebration exuded cheer and warmth.

Want to know more about Eree and Chuck's story? Click on any of the following links:

Eree and Chuck met at the University of Santo Tomas (UST) Hospital. Chuck bumped into Eree at the hospital lobby, and asked for directions. The following time he went to the hospital, Chuck got lost again. For the second time, he found Eree, and asked for directions again. Chuck also requested for Eree's number, saying that he'd text Eree in case he got lost again next time.

A friendship blossomed between the two, and they soon started dating. Eventually, Eree and Chuck became a couple.

Months before Eree's graduation from medical school, Chuck talked to Eree's parents, and asked for her hand in marriage. The two started planning for their wedding, and because there wasn't a formal proposal from Chuck, Eree thought that she wouldn't get an engagement ring from him. However, on a supposedly ordinary dinner with their friends, Chuck surprised Eree by popping the question--and presenting her with a ring.

Eree and Chuck call each other "Sleepy Panda" and "Chubby Panda," and they figured that incorporating their favorite animal into their wedding details would make their big day even more special.

The couple chose a yellow and blue motif to complement the playful panda theme. Eree and Chuck's various wedding details--like their invitations, favors, and even their wedding cake--all featured panda designs.

Both the bride and the groom were hands-on in planning their wedding. Despite having to halt the wedding preparations in anticipation of Eree's board exam, the couple still managed to pull off their dream affair. Eree shares the most valuable lesson she learned in the process: "Set more than enough time for the preparation, so you would not cram."

Watch now
Get the latest updates from Female Network
Subscribe to our Newsletter!
View More Articles About:
Trending on Network