Charming and quirky details made this rain-themed wedding a cheery affair.
by Keisha Uy | Feb 17, 2012 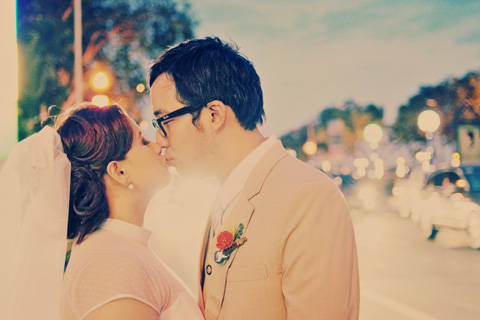 Camille and Peewee exchanged I do's with a unique rain-themed wedding, which they charmingly dubbed as Under One Umbrella. Their affair was filled with warmth and cheer as they incorporated lots of personalized and quirky details.

Want to know more about Camille and Peewee's story? Click on any of the following links:

It wasn't exactly love at first sight for Camille and Peewee when they first crossed paths. They weren't interested in one another, or anyone else, as they were both still moving on from their past relationships. Peewee then just regarded Camille as a friend of his bandmate's girlfriend--Camille, on the other hand, had a crush on Peewee but barely admitted it.

When Camille and Peewee went to the same retreat, things began to take a different turn. While praying intently, wishing that he'd find the person he would spend his whole life with, Peewee saw Camille, who was praying as well at his far left. Peewee later approached Camille, and that sparked a romantic connection between them. "We started to really get to know each other more. We were texting each other on a daily basis, having endless YM conversations, and occasionally, we got to hang out," shares Pewee. He adds, "We started to grow really close with each other."

As the two developed deeper feelings for one another, they realized how they were the answers to each other's prayers, and they finally became a couple. Then on their Christmas date, Peewee popped the question to Camille, to which she wholeheartedly said yes.

Camille and Peewee tied the knot with a charmingly themed wedding, which they dubbed as Under One Umbrella. Since their wedding date fell on the rainy month of July, they decided to welcome the rain and make it the inspiration for a cheery celebration of love. Chic and quirky details, which also exuded a homey 50s vibe, gave their affair a whimsical flair.

Their chosen theme allowed Camille and Peewee to exercise their creativity. "The elements used in styling are umbrellas, clouds, and crystal beads [used] as rain [drops]. And when it's raining, where is the best place to be? At home, where it is cozy and [where] you're relaxed," says Camille of their unique theme. Their event was peppered with lots of DIY elements, which really gave their wedding lots of personality.

As a wedding coordinator herself, Camille found it hard to trust anyone else with the tasks for the wedding. "I never knew how hard it would be for a wedding coordinator to plan her own wedding. Everyone, myself included, thought it would be easier. But as I started planning and fixing all the details of my wedding, I couldn't stop myself from doing everything on my own. Especially because I was so accustomed to do things for my brides, I knew what I had to do, and I wanted to do it myself," Camille shares. Despite the overwhelming tasks, Camille says that all the effort was worth it in the end.

Camille shares that couples should choose their coordinator well. "Find the perfect wedding coordinator whom you will get along with, and who has the same wavelength as you. Learn to let go and trust that they will do what's best for your wedding," she says. 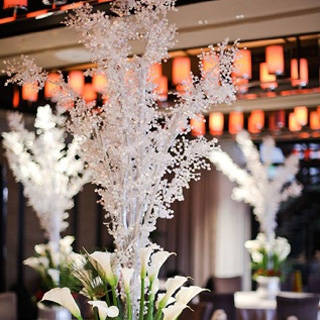 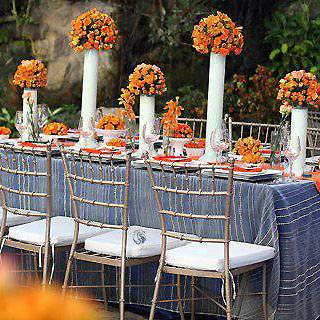