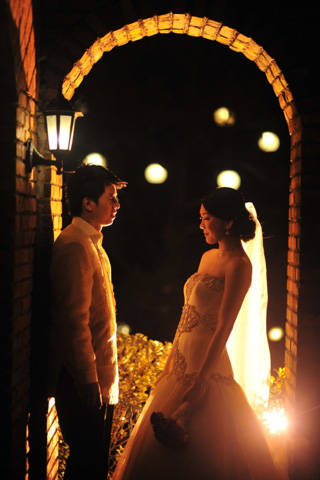 Aubrey and Albert tied the knot in Tagaytay with a classic, romantic wedding. Elegant elements and DIY details gave their event a heartwarming ambiance.

Want to know more about Aubrey and Albert's story? Click on any of the following links:

Aubrey and Albert met on their last year in high school. Since they were both tall and had lanky frames, their classmates would pair them up. The constant teasing led them to having a good friendship, and they spent lots of time together. As their graduation ball was nearing, Aubrey expected Albert to ask her out to be his date. However, Albert asked another girl out, and that made Aubrey's jealousy drove her to cut her ties with him.

Two years after their graduation, Aubrey and Albert's paths crossed again when Aubrey visited a friend at De La Salle University. They rekindled their friendship, and Albert began to pursue her again. Aubrey, however, felt that they were better off as friends.

The two stayed in touch, and after a year, when Aubrey was single again, Albert took another shot at wooing Aubrey. He asked her if she could accompany him to a mall to meet a friend. "Little did I know [that] we weren't really meeting anyone, and that it was just his excuse [to] take me out on a date. All the feelings came back, and after three missed chances, we finally felt that it was the perfect time for us to be together," recalls Aubrey.

Three years into the relationship Albert took Aubrey to Antonio's in Tagaytay, where they regularly spend special occasions together. "While taking a stroll at the garden, he held my hand, kissed it and said, ‘Someone said, that if a woman is too good for you, marry her.' [He] then got down on one knee and asked me to marry him." Aubrey shares. She, of course, said yes.

Aubrey and Albert tied the knot with a classic romantic destination wedding. The couple exchanged I do's at the Transfiguration Chapel in Caleruega, Batangas, and then held their reception at their favorite and well-loved Antonio's restaurant. To complement their reception venue's elegant interiors, the couple decided to keep the décor minimal and just add chic low arrangements of roses. The couple worked with a dove gray, fuchsia pink, and blush pink color palette to deliver the feel that they wanted.

To make their affair warm and heartfelt, Aubrey and Albert incorporated DIY details into their wedding. The couple stamped their missalettes, souvenirs, and favors with personal touches. "A wedding is a once-in-a-lifetime event in your lives, and no matter how small or grand it is, it should be a reflection of who you are as individuals and as a couple," says Aubrey. Thus, she advices couples to hold on firmly to what they envision for their weddings. She adds, "You can get as many inspiration as you want, and take advice from people. But remember, years will pass, you will look back at your wedding day and you [would] want to remember it as your wedding and not somebody else's." 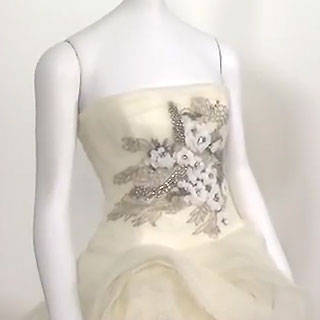