This dreamy Tagaytay garden wedding was marked with a chic celestial theme.
by Keisha Uy | Jul 15, 2011 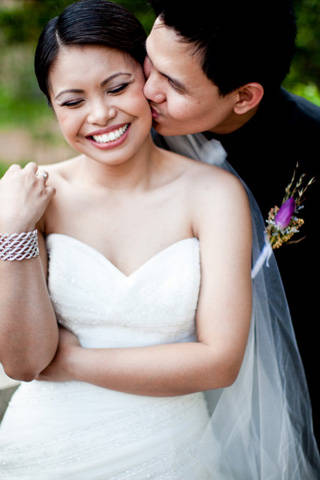 Highschool sweethearts Aleng and Topher exchanged vows with a garden wedding at Tagaytay. Marked with a chic celestial theme, the couple's affair proved to be a whimsical and cozy affair.

Want to know more about Aleng and Topher's story? Click on any of the following links:

"It was 15 years ago when a talkative, skinny girl met a tall, quiet boy at school," writes Aleng on her and Topher's wedsite about the beginning of their relationship. They were both highschool freshmen then, and Topher was a transferee at Aleng's school. "Most of the girls in class noticed him since he's smart, funny and cute! [I] didn't," says Aleng. She was not paying any attention to him at that time, although he definitely noticed her.

On their sophomore year, Aleng started to notice Topher--and she even mustered enough courage to ask Topher who his crush was. At that time, Aleng didn't get the answer she had hoped for, as he mentioned someone else's name. Topher eventually made up for that incident the following year, when he randomly gave Aleng a bouquet of flowers. "The date was August 21, 1997; it was an ordinary day at school, but during [our] lunchtime something extraordinary happened. [We] officially became a couple in the midst of guys playing Magic cards and girls sharing stories. It was one of the happiest [moments] of [our] then simple life," Aleng fondly recalls.

From then on, the couple have been inseparable and have faced challenges together. In 2008, the two decided to get married civilly after learning that Topher would have to leave the Philippines to work abroad. Their marriage served them well as Aleng was able to follow Topher to the States immediately. Three years later, the two then went back home and took their vows to the altar, and their relatives and friends served as witnesses.

Aleng and Topher celebrated their church wedding with a whimsical celestial theme. Featuring a plum and silver color palette, the couple's wedding also took on a chic and laidback look.

After exchanging I do's at the Transfiguration Chapel in Caleruega, Aleng and Topher had a garden reception at the Moon Garden in Tagaytay. Sprays of fresh flowers matched with rustic and quaint accents cast a dreamy charm on the couple's wedding.

The couple's 150 guest-affair was made cozier with touches that reflected their personality. While the two personalized their wedding with their DIY projects, Aleng and Topher also picked a special track for their first dance: Incubus' Admiration--a rock/alternative song, which they both love. Moreover, guests got to enjoy a Starbucks kiosk at the reception, and trivia games were played to keep the everyone entertained. "The most important thing for us is for the guests to enjoy the reception and be well fed," Aleng shares. 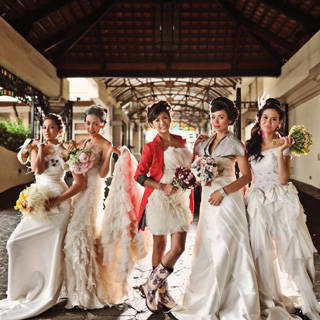 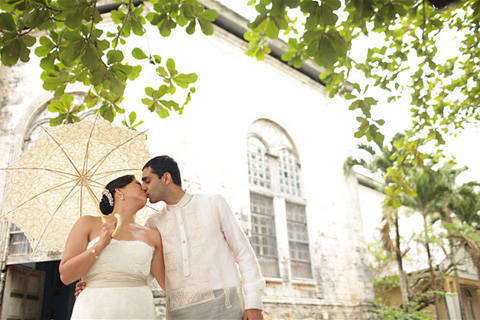