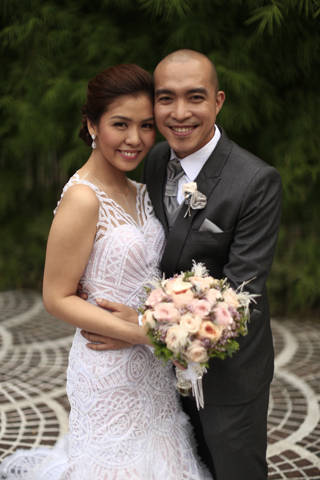 Prime couturier Jazel Sy and groom Coco had an intimate city wedding, which was attended by their closest friends and family. Glamorous gowns and suits designed by the bride were worn by the entourage, making for a stylish wedding.

Want to learn more about Jazel and Coco's wedding? Click on any of the following links.

Jazel and Coco first met at a get-together held at the house of the groom's sister. Since then, the two became good friends especially because Jazel would hang out regularly with their little crew. Spending time with each other helped their friendship blossom into something deeper and more intimate. What started out as innocent conversations and rendezvous turned out to be the start of their beautiful love story.

After years of dating, the groom realized that it was about time for them to settle down. He proposed to the bride in a comedic yet romantic fashion by conspiring with their friends during a night out. Jazel shares, "One of his friends was planning a surprise proposal to his girlfriend [or so they said] so we all went to dinner. When the girl arrived, the guy immediately proposed to her. Pretending to be shocked by what happened, she immediately said no. With a confused face, Coco's friend asked why and his girlfriend answered, 'because someone else in this room deserves to ask and answer that.' Then there he was, standing across me with flowers in hand, he asked me to be his wife."

Jazel and Coco tied the knot in a romantic ceremony held at a lovely church in the city. The festive gathering was attended by their closest friends and family who also helped them with the wedding preparations.

The bride, being a professional couturier, created her own wedding gown as well as the groom's suit and the entourage attire. In addition, aside from the one she wore when she walked down the aisle, Jazel also produced three other gowns for her and one additional suit for the groom. Each outfit featured unique design, style, and cut. For the bridesmaids' bouquets, the bride and her sister created customized bunches fabric flowers in pastel colors.

The reception venue was filled with quaint items that resembled the couple's passions in life. Dress frames were placed around the venue while smaller versions were used as centerpieces. Uniquely printed fabrics in different shapes and sizes were hung on walls creating an eclectic and romantic ambiance. Different shades of gray, blue, and taupe filled the room giving it a calm and warm mood.

The group then transferred to a yacht where the mood was more laidback and cozy. The glamorous event that lasted until the wee hours proved to be a success. According to the bride, "Brides should enjoy the details of the planning and preparation stage. Also, it really helps a lot to plan and book suppliers ahead of time." 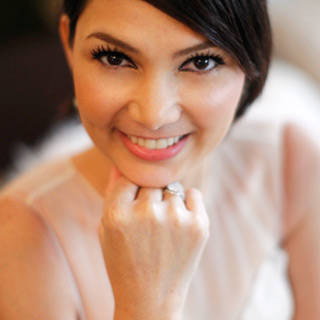 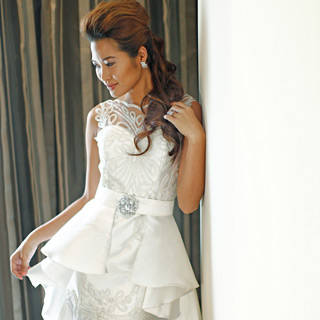